Simple ingredients come together super quick in this recipe. The flavors of the peppery arugula, the buttery salmon and the acidic dressing, play very well together. Definitely a weeknight dinner to put on repeat.

I used Trader Joe’s Unexpected Cheddar in lieu of Parmesan, just because I wanted to. The addition of mustard to a vinaigrette acts as an emulsifier, and keeps the oil and vinegar together with a creamy consistency. Don’t forget to season your vinaigrette before dressing your greens.

1 tablespoons fresh juice from 1 lemon, plus wedges for serving

crumbled parmesan cheese (or any sharp cheese that you prefer)

Salt and Pepper to taste

Pat the salmon filets dry with a paper towel. Season on all sides with salt and pepper. Heat 1/4 cup olive oil oil in a large skillet over medium-high heat until shimmering. Add salmon filets skin side-down. Immediately reduce heat to medium, medium low depending on your stove. Cook, pressing gently on back of filets to ensure good contact with skin, until skin is rendered and crisp, about 6 minutes. If skin shows resistance when attempting to lift with a spatula, allow it to continue to cook until it lifts easily.

While the first side of the salmon cooks, whisk lemon juice, remaining 3 tablespoons olive oil and the mustard in small bowl until combined. Season with salt and pepper.

Flip salmon and cook on second side for another minute or two, or to your desired doneness. I like my salmon close to medium rare/medium at 125 to 130 degrees.

Plate the arugula and top with avocado and tomatoes, dress with the vinaigrette. Crumble on your chosen cheese, place salmon on bed of salad and serve with lemon wedge.

Burrata Di Stagione, is a fancy or Italian (if we are being exact) way to say “what’s in season”. In my last post I mentioned the amazing starter that we had in Santa Monica, but I think I forgot to mention that it centered around burrata. Burrata with arugula, fuji apple, roasted butternut squash, and toasted hazelnut all drizzled with an agrodolce sauce. Another fancy or Italian way to say “sweet and sour”.

I have made this multiple times, it’s ridiculous how good it is. I wish I was having it for dinner tonight, it’s a thing.

Thanks to the convenience of laziness these days, we can buy already cubed butternut squash. That shaves a good half hour off of the prep and I most likely wouldn’t have made this if I had to do it myself. It’s the little things.

I roasted some butternut squash and fuji apple in the oven until caramelized, meanwhile toasted the hazelnuts in a pan.

Then we tossed some arugula with olive oil and S&P. Tore the burrata and placed it on the bed of arugula. Scattered the roasted squash, apple and toasted hazelnuts on top.

Close to serving time, we made the agrodolce, which is so simple. Simmer some vinegar (sour) with some honey (sweet) and some red pepper flakes for heat and let it reduce until syrupy. I would have added raisins but I didn’t have any. Next time, I will.

Drizzle the agrodolce and your best olive oil on top of the entire plate and serve with bread. Or your fingers, or both.

The final dish is….

I would say happy new year, but I don’t think that is allowed after the 7th.

To say time is flying is an understatement, don’t ya think? I mean, it’s still January so I am feeling good that I am getting something written here. I am not quite sure where the first part of the month went. We went out to dinner one night for my father’s birthday, besides that, it’s been very uneventful. Work, school, laundry and repeat.

New Years eve was low key. We made cupcakes, a charcuterie board and chips and dip taken to another level. I took Ruffle potato chips and drizzled them with honey and sprinkled on a Japanese seasoning made with nori and sesame seeds and served them with onion dip. It’s ridiculously good.

The girls celebrated the New Year with New York, and then went up to bed. They didn’t realize it until the next morning, ha, suckers.

The kitchen has been put to use, I have been trying out new things and old favorites.

I was really excited to roll out fresh pasta. I felt all sophisticated and proud of myself. Buuuuut, they tasted like flour and nobody liked them, so fail. Now I need a fool proof fresh pasta dough recipe.

I redeemed myself by making fresh pizza dough. I made two different recipes, one with cold water and one with warm water, and ended up with enough dough for a neighborhood potluck. We made two pizzas for the kids, and one for the moms, everyone was happy.

This pizza recipe, is foolproof. It’s SO GOOD. This time, instead of using marinara sauce, I just crushed some canned San Marzano toms with my hands, Kaili added in some garlic salt, oregano and olive oil and that was the sauce for all three pizzas. The girls approved.

We had a big HALF to celebrate on the 10th. Averi turned 7 1/2. In our house, we celebrate half birthdays. It’s nothing extravagant, but we think it deserves recognition. Turning a half year older is a big deal to kids and we think it calls for a little something special. On their day, they each get to choose whatever they want for dinner, and we’ll usually have a treat.

McDonald’s and chocolate cake for this 7 1/2 year old.

When I was younger, my parents would make Dutch Babies every so often for breakfast. Or they would order it out and share it. I have my moms recipe and have for decades. Finally, I made it, and you guys, I have been wasting time on pancakes because this was so good, and easy.

I made this in a cast iron which I heated in the oven until it was hot. Then I added the butter and then the batter. My oven cooks hot and fast, I took it out after 15 minutes and I think it could have even been done closer to 12 minutes. So bake accordingly.

I sprinkled a little powdered sugar on top, and then we drizzled it with syrup and dove in.

We are going to take advantage of a day off and do something fun this weekend. It’s supposed to be sunny and warm and I have the best idea. Tell you later.

This recipe is what everyone needs during this self isolation era. I can promise you that however you are getting your groceries, the goat cheese and arugula are not what’s flying off of the shelves. However, the flour and yeast is so hopefully you already have that stocked in your pantry or you can find pre-made pizza dough; luckily I did. 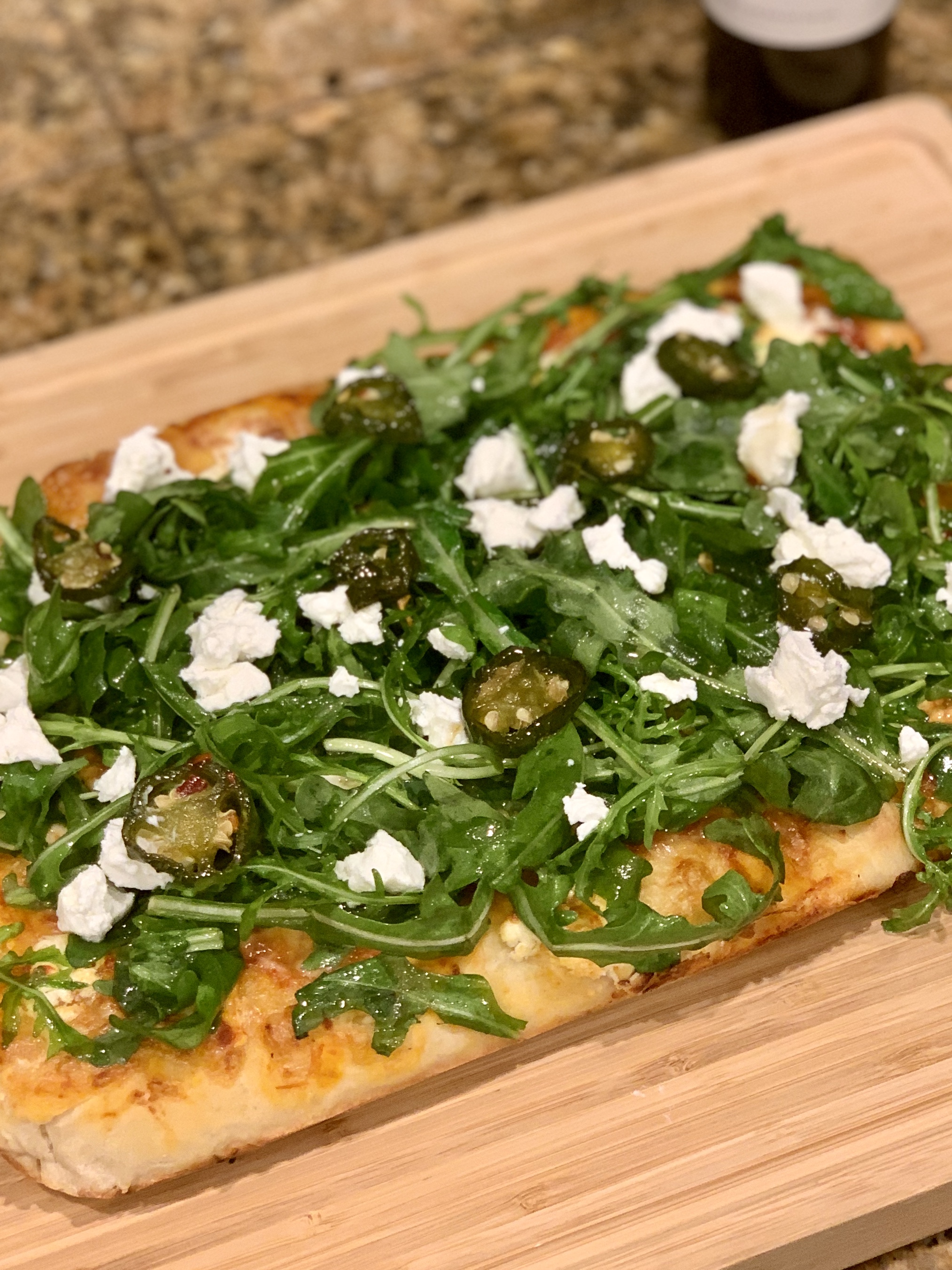 Prep the dough and let it rise.

Drizzle a couple of tablespoons olive oil into a 9×13 cake pan or dish.
Remove the dough from the bowl and knead it a few times until silky, using a sprinkle of extra flour if needed. Place the dough in the pan and press it out towards the edges. Once it’s in the pan and as close to the edges as it will get, cover it and let it rise again for 30 minutes.
Preheat the oven to 550 degrees F.
To assemble the pizza, press the dough down in the pan with your fingertips and remove any large air bubbles. Spread the sauce on the dough, leaving a small border around the edges. Add on about 1/2 of the goat cheese and top with the grated cheeses.

Bake the pizza for 15 to 20 minutes, or until the cheese is golden and bubbly and the crust around the edges is golden. Toss the arugula with the tablespoon of olive oil. Remove the pizza and drizzle it with a few tablespoons of the spicy honey.

Top it with the arugula. Add the remaining crumbled goat cheese, don’t forget the jalapeno slices!

Sit back and enjoy!

A few weeks back we had a very nice lunch in Little Italy. Aside from a couple of delicious pies we also ordered a farro, watermelon, tomato and feta salad with mint and arugula. It was AHmazing. I have been thinking about that salad ever since. I almost made it for Thanksgiving but wasn’t sure that was the best audience to try it out on. Safely back in my own kitchen, I set to work.

In all actuality it’s a fairly easy recipe. If you make the farro ahead of time then you shave 20 minutes off of your prep work. The end result is the perfect combination of sweet, salty, chewy, and a tad spicy, but the punch of mint is the real winner. 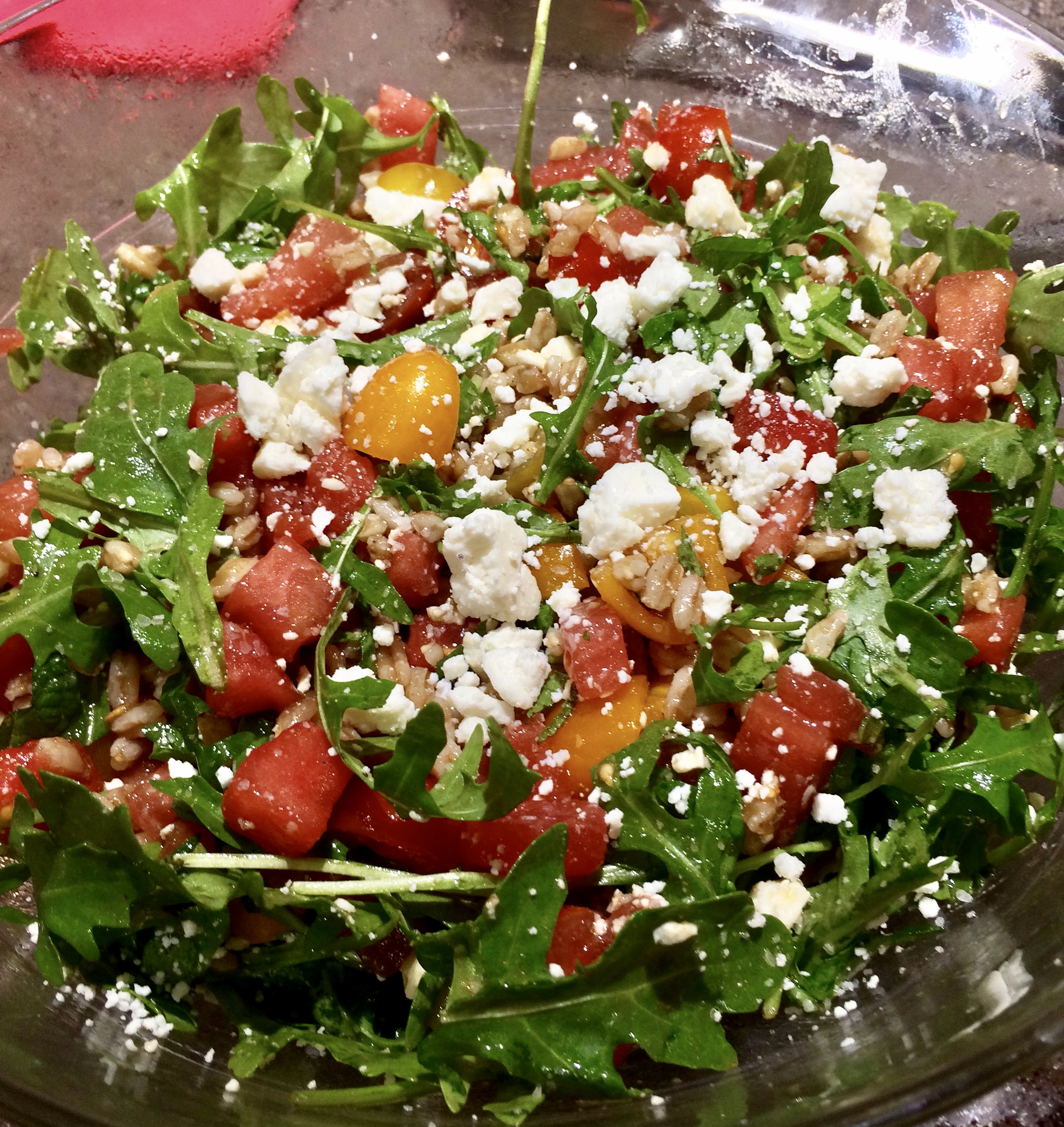 Bring a medium saucepan of salted water to a boil over high heat, stir in farro, reduce heat to medium and simmer until farro is al dente, about 20 minutes. Remove from heat, drain then spread onto a rimmed baking sheet to cool.

While the grains are cooling, make the rest of the salad. Combine tomatoes, watermelon, 1 tablespoons of the olive oil, a pinch of salt, and some freshly ground black pepper, stir then set aside until flavor is intensified, about 20 to 30 minutes.

Combine remaining olive oil and vinegar in a small jar, close, and shake until well combined. Season with salt and freshly ground black pepper then mix with the cooled farro.

When tomato-watermelon mixture is ready, drain off any juices and add the mint then stir the mixture into the farro, add the arugula and feta and stir through. Serve immediately.

Friday evening Kaili was invited over to a friends house to pick a pumpkin. My friend has a serious green thumb and I feel like a bad human being when I go to her house because her backyard is like a little farm and I can’t even grow tomatoes in a container. 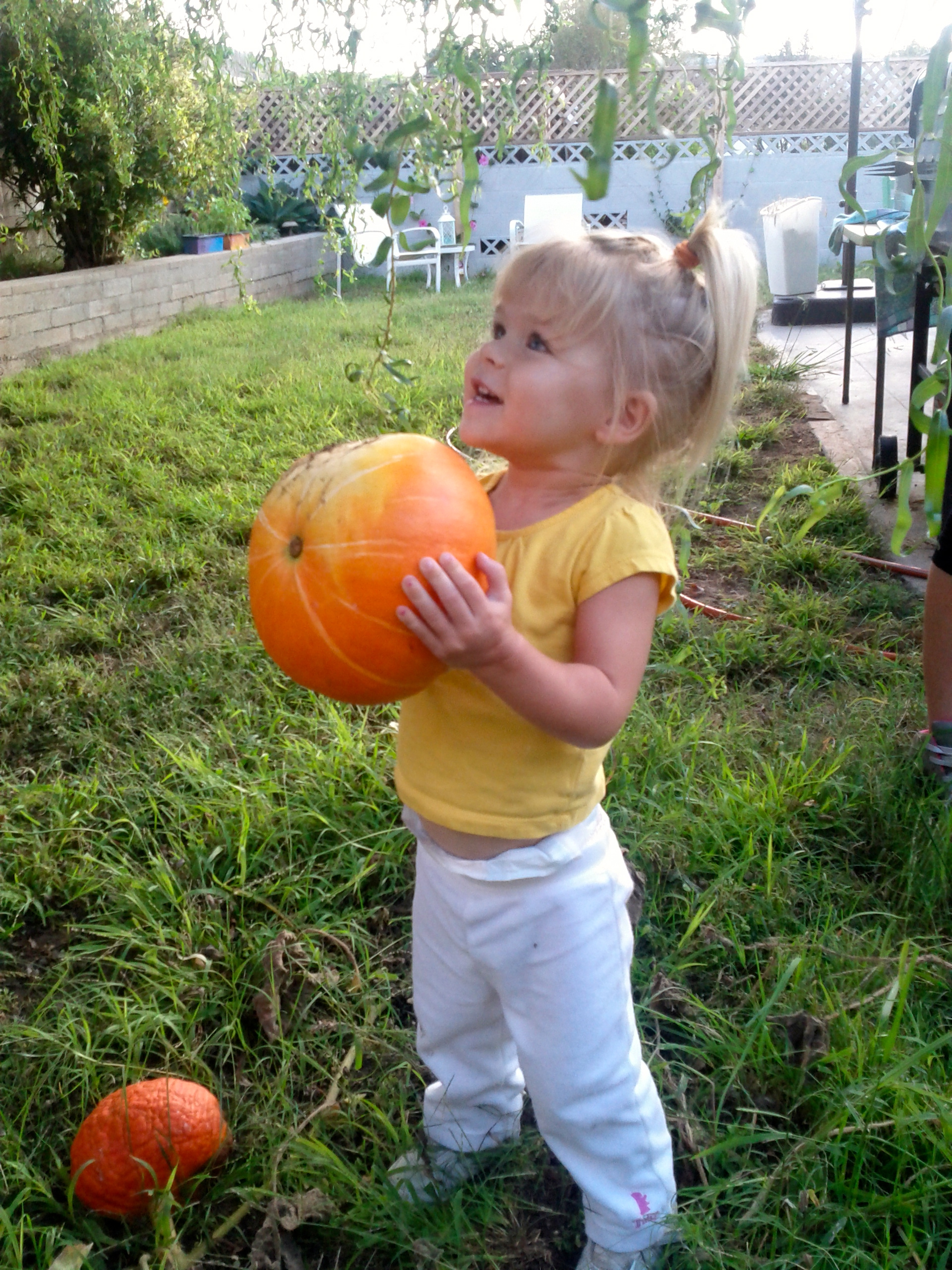 Saturday I found myself with leftover blue cheese and Pears from our Farm Fresh delivery. I knew that I wanted to put them on a pizza with some arugula because I heart arugula . Sprouts didn’t have any pre-made pizza dough, are they done with that? So I was forced to make my own. I used this Martha Stewart recipe that only required an hour rise time, perfect.

Once the dough was rolled out i brushed garlic + olive oil onto the dough and baked it for a few minutes. Then I threw on some mozzarella, crumbled blue cheese, roasted pears and red onions and baked for 10 minutes, toss on some arugula and return to oven for a few more minutes.

I would actually recommend using gorgonzola instead of blue. The cheese was so strong that it overpowered the other flavors.