Kaili was adamant she wanted a “Frozen” birthday party. To us that consisted of a “Frozen” bounce house and some “Frozen” themed gift bags, ya that’s it.

We had finalized the guest list a good month before, a chunk of our friends, some family and our neighbors (because we have the best!) She was inviting 6 friends from her school and 3 not in her school. I sent the invites out early and literally only had 2 RSVPs from her school mates, one I had to fish out. That was enough to make me not want to do this again, but tough shit I guess.

I went back and forth on having a taco stand but the price was a leeeeetle too much, so I ended up catering it from our local Mexican market and it worked muy bueno. Carnitas, carne asada, shredded rotisserie chicken and quesadillas ( thanks mom)  beans, rice, guac and salsa. An abundance of food and I am pretty sure we just threw out a good 4lbs. of leftover rice and beans. 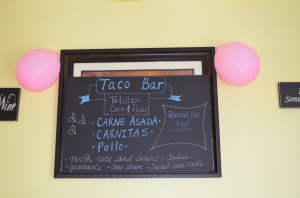 We had the bouncy in the front yard so the kids ran from there to the backyard where the playhouse is. I think it all got good use and went smashingly. The weather wasn’t the best and when it started to sprinkle I almost lost my shit but it turned out fine. While the majority was outside eating, chatting and playing, my family was huddled on the couch busy with something important, socialites.

I had decided before the party that presents weren’t going to be opened when the kid guests were still around because it’s hard for them to sit still and with the amount of people we had it would be a lot easier to “maintain” later that day. See this post. But, if you can believe it, Kaili started opening presents earlier than I wanted, and not with me…or Shane!  Yep that is right, someone else decided it was okay for Kaili to open some presents without her parents present. I ran in to find the unwrapping underway and then it was apparently time to open presents. I have been called “dramatic” before and I have to say it took a lot for me to not lose my shit over this. I am still not happy about that. 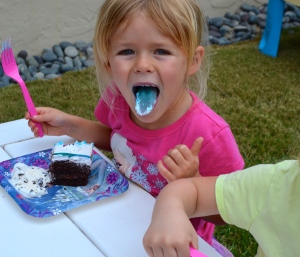 Kaili had fun and got way too much good stuff,  that is all that matters. Eventually everyone trickled out and the kids went to sleep so the adults could play.

Next year might be a little different as we will be having a very quiet party and Averi might just be shit out of luck and never have a birthday party.

Bed rest, possibly two of the most dreaded words. EVER. Anyone who says they would love to be on bed rest, clearly has never been on bed rest.

She fell out of her  bed the other night for the first time. A loud thud followed by crying, I couldn’t help but jump up and go to her. Shane calmed her down and surprisingly she went right back to sleep.

That shit was scary.

Once the long 48 hours were over I happily took a shower then planted myself back on the couch. Trying to stay off my feet unless necessary makes for a very low key couple of days. A trip to the store, a walk, baking and art with the kid about wraps up our weekend.

I am trying my hardest to stay out of my head. Since I have been through the dreaded 2 week wait many a times before, it’s hard not to read into any twinge or non twinge for that matter. I know each time is different but with each day that goes by I get more concerned that this round didn’t take.I have to stop myself and think positive. I also caught a cold, no medicine and no caffeine is a bad combination.

I want to say thank you for all the well wishes from you guys. The transfer went just as I expected it to, smooth and quick.

We arrived at the office at 10:00 and sat around drinking my water until the embryologist came to get us. She showed us our Grade A free range embryo. She said it thawed just fine and we were ready to rock n roll.

I took my valium and then into the procedure room we went to got ready.

To do the ditty. Just kidding.

Once things were in place, the embryologist wheeled in our future child and Dr. Garzo got to work, not 10 uncomfortable  minutes later he was done and I was officially a little bit pregnant.

I continued to lay down for 30 minutes and then got my discharge info and was wheeled down to the car.

I spent the afternoon napping and reading. Besides the grogginess from the valium I feel just fine. Although once I started to get hungry, Shane was on the phone with work. I then realized I should have planned on stocking up my bedside drawer with snacks.

I must stay on the bed or the couch until Friday night/Saturday morning. Saturday I can return to my normal routine with some limitations, no lifting Kaili and no physical activity other than walking. This will continue until we hear a heartbeat or I get a negative pregnancy test.

Remember when I got my bag of goodies last week? Needles, Progesterone, alcohol swabs?

I was dreading, no seriously dreading the first injection. But, it wasn’t bad. At all.

Shane has been giving me them since Friday and he has gotten really good at it, I don’t feel a thing.

Then Monday rolled around and I couldn’t shake the fact that I was going to have to give myself the shot. I so over reacted, imagine that. I mean there is nothing fun with jabbing yourself with a big ass needle but it’s totally doable, I didn’t faint, cry or even whimper. Winning! The worst part is the the aftermath. I am left with sore bruises  dotting my booty and hips. Maybe I am doing something wrong? Human pincushion.

Today is my transfer day. I don’t have any real emotions about it, I’m not nervous or worried, it’s just what it is, going to the dr. to get knocked up…hopefully.

I will tell you all about it. I mean what else am I going to do in bed for 48 hours?

6 estrogen patches did the trick, my lining jumped from a 6 to a 10. The time has come.

We met with Dr. Garzo in his office and with my stomach in a knot we looked over our embryos. We have 1 good, 7 fair and 1 poor embryo to choose from, we went with the obvious choice.

We scheduled our transfer for next Wednesday. It’s hard for me to wrap my head around this. I start Progesterone injections, prednisone and doxycyclin tomorrow. I continue the estrogen patches as is and if I get a BFP{big fat positive} then I will continue the PIO {progesterone} injections and the stupid patches through week 9 of my pregnancy. ARE YOU FREAKING SERIOUS?

I hated the progesterone injections last time. THEY HURT! But at least last time Shane was local and able to give them to me. This time I am going to have to put on a brave face and do them myself when he’s gone. This is stressing me out. I can’t wait to show you the needle.

Here’s the plan. I show up at the Dr. an hour before our transfer time on Wednesday. I sit and drink water as instructed and take my valium when they tell me to. Then I get prepped for the transfer and Dr. Garzo will attempt to knock me up. I will have a blood test 11 days later. All the while I have to stick a long ass needle in my gluteus maximus every.damn.night.

Is she done complaining yet?

I am cautiously nervous about this. The excitement I felt last time has been replaced with memories and I can’t help that. So, no need to tell me “this time it will be a breeze” because I know that it probably will be but if you know me, I worry. It makes me sad and frustrated that I have to go through all this shit to have a baby. I don’t want to give myself shots and I don’t want to pay 100+ dollars for each box of 16 patches, I change 6 of those damn things every 3 days {and that is if they all actually stay on} Never happens.

I am done. We can continue this next week.

The one day, ONE DAY I don’t give myself extra time to get the the Dr. all hell breaks loose in La Jolla. Three accidents surrounding the one place I needed to be. One was a biggy and closed down the main street in all directions. One was in the intersection of the hospital entrance, so no one could even get into that area and the third one closed the entrance to highway 5, down the road. So I sat with all the other cars for a good 45 minutes until they sorted it out.

Made it into the office one hour late, sat in the room and waited another 20 minutes, why are there so many infertile people? Then once he came in, it was a wham bam thank ya ma’am sort of thing.  One quick ultrasound and 3 minutes later he was gone with the wind. So. Awesome.

So how did it go? Good! No cysts, “carry on good sir“. Next Friday is a big appointment. Shane must come with to sign papers, they will check my lining and if it looks good then we “should” be able to schedule the BIG day. The nurse said anywhere from 5-14 days later.

“Rules, there are no rules!!” I don’t have any restrictions until after the transfer. “Party on Wayne“.

Actually, It’s my coffee that I am really worried about stopping. If you were reading this blog from the beginning than you might remember  how bad my headaches were in the beginning of round one. We never did figure out if it was caffeine withdrawals or the Lupron injections.

I also had an estrogen blood draw to see how my levels are. I will add 2 patches if my estrogen is low or remove a patch if it’s too high, I think I can handle that.

By the time this was all said and done I was running late to pick up Kaili. That one big accident was still detouring traffic so it took me awhile to get to her school. However, after all my bitching I don’t want to seem heartless. My problems are nothing compared to whomever was in that vehicle and their family,so even though I was pulling my hair out and cursing myself for not leaving earlier, things could be worse. I am not blind to that.