This pizza has an eggplant base crust. I will be honest when I first saw the recipe I hemmed and hawed and tried really hard to keep the negative thoughts to myself. I reminded myself It was Father’s day and this is what he wanted, so don’t be a bitch.

This crust was pretty easy to make, peel an eggplant, grate it, squeeze out the liquid and mix in a few more ingredients…done.  I followed this recipe for the measurements and ingredients  but when it came to cooking it I more or less followed the cauliflower crust recipe. The two crust recipes were so different in cooking temperature and time but I was pretty sure they didn’t need to be and I was right. I cooked the eggplant crust on a slightly higher heat for a shorter amount of time and it was fine. I did however flip the crust over in the middle of cooking like the original recipe suggested, didn’t want to get too crazy.

I was highly surprised by how good this was as a crust. As Shane said, “you wouldn’t want to make bread sticks out of this”. Alone is has a slightly bitter flavor so use this for a pizza with strong flavors. I put caramelized onions, goat cheese, arugula, prosciutto, tomatoes and basil and it was delish. The sweetness of the onions is amazing with goat cheese…just saying. 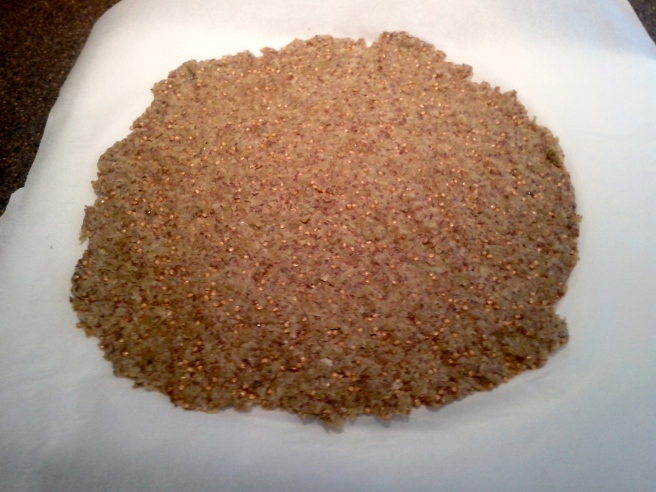 salt and pepper, to taste

Grate eggplant with a cheese grater, discarding the skin.

Place grated eggplant in a clean dish towel, and squeeze over a sink to remove excess liquid.

Add in the flax meal and almond meal.

Whisk egg in a smaller bowl and add to batter.

Add salt and pepper to taste.

Mix until ingredients are evenly combined.

Pour out batter onto a parchment-lined baking sheet.

Smooth batter out with hands into a thin layer about 1/8 inch thick.

Bake for 10-13 minutes or until golden brown, then remove the crust from oven.

Lightly grease another piece of parchment paper with olive oil, and place on top of crust. Carefully flip the crust and then slowly peel off the parchment paper from the bottom side.

Return to oven and cook 8-10 minutes until golden brown and edges are crisp.

Now you can add your topping and pop back into the oven until cheese in melted 7-10 minutes.