As I was looking through the freezer this morning, I came across a box of puff pastry buried in the back. I am embarrassed to even think how long it’s been in there, but I am pretty sure I didn’t have a kid or a bun in the oven the last time I used it. {hangs head in shame} So I decided then and there that I would use it today, but for what? Hmm that was the question. After some scouring of recipes I found this one from Simply Recipes. I have used a lot of her recipes and they all have turned out great, so I went with it.

Now since this was spur of the moment decision I had to use what I had on hand, that meant 2 small Fuji apples. Even though I had walnuts I decided to throw in some slivered almonds because I thought that sounded better. I omitted the currants, all I had were raisins and Kaili has now decided she likes them, so I shall save them for the K bear.

I managed to get the apples peeled, cored, diced, got all the ingredients mixed, rolled of the pastry dough, assemble the turnovers and throw them in the oven all while Kaili was down for a nap. Success. 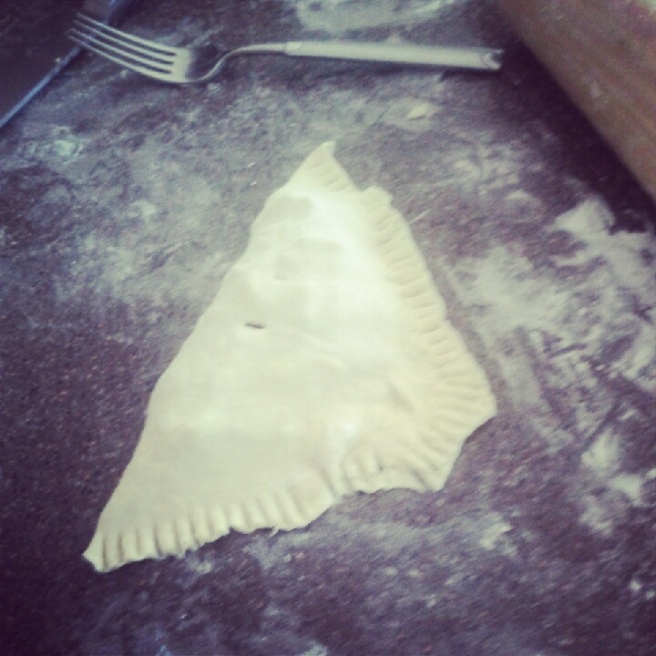 Even though I felt like a rockstar once they were in the oven, I soon found out that I must have missed a step. I went back and re read the recipe only to find out that I was supposed to brush some egg wash along the corners of the pastry dough before folding it. I assume it’s so this doesn’t happen…

The inside oozed out all over the baking sheet. Oh well, lesson learned… They will still be yummy right?

Yummy they are!  Even though they aren’t the prettiest things they are very flavorful and the the crust is perfectly flaky. Oh and all that goodness that oozed out, well it tasted like apple spice caramel, de-lish-ish!

One thought on “Apple Turnovers”