Kaili was cranky as we drove to the Walla Walla airport early Friday morning, can’t blame the girl, we woke her up at 5 am. When we got to the check in counter to check our bags, our flight was about to board. Great thing about small airports I guess. The bad thing, I was hoping Kaili could get some energy out before  we hopped on the plane, no such luck. Of course once we were all settled on the plane, we were told the flight would be delayed due to the fog, so we sat with an impatient toddler on our laps. About 30 minutes later we were taxiing down the runway, and then we stopped. The fog  was back and we weren’t going anywhere. 15 minutes later we headed back to the gate, deplaned and our flight was cancelled.”Welcome to Walla Walla”, the smug flight attendant announced, I’m sure she thought she was being cute, but in the freezing cold, in the early morning with a toddler whom you woke up, that shit isn’t funny!

The next flight we could get on was Sunday morning, same flight, same early morning wake up for K-bear…can’t wait! No really, I can’t wait to go HOME!

We took advantage of having one more Saturday in WA. A  lot of the small wineries are closed during the week, along with everything on Main street. We were able to hit a few that we missed and I was impressed with all of them.

We saw horses and dogs, oh my. 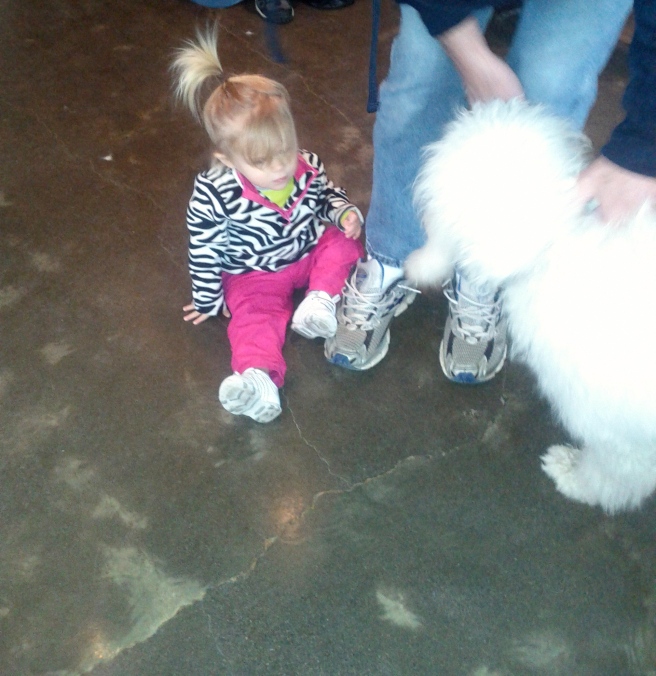 The winery dog at Relic was a hyper pup, and a big one at that. Kaili really wanted to play but she wasn’t quite big enough to hold her own. I was a little more lenient with Kaili and the pup than Grandpa G.

Fingers crossed the weather cooperates for our flight tomorrow. I have a NYE party to plan, oh and a Seahawks game to watch, and grocery shopping, some cleaning to do, laundry, and wine to drink, you know the important stuff.

One thought on “Welcome Back to Walla Walla”