I want to preface this post so I don’t get pushback. With months of Covid in action we now know that there isn’t one activity that is safe or risky, it’s all a calculated risk. We do know that wearing masks, social distancing, washing our hands and being outdoors as much as possible are things that we can do to help keep us all safe.

Since SDUSD hasn’t yet opened the doors to on-campus learning, we decided to take a tropical getaway before shit gets real. With that said, I put a lot of time in researching a place to go that was warm but most importantly a place that had all of the above precautions in place. I joined social media groups to ask questions and followed people who were already at the destination or had just came back. I also didn’t want to be in an airport any longer than necessary, so a direct flight was a priority.

We decided on heading down to Puerto Vallarta, the weather and ocean temps were great, the resort was on top of all their safety protocols and the flight was quick and easy. The flight left San Diego early one morning and it was the emptiest flight I have ever been on, I think there were about 15 of us on the entire plane. The airport in PV was also empty and it was a breeze to get through. Our luggage was sanitized before we got in our private vehicle to take us to our hotel.

When we arrived at the resort we were greeted with hand sanitizer and a glass of sparkling wine. Once checked in, we headed straight to the room, dropped the suitcases, put our bathing suits on and went straight to the water. 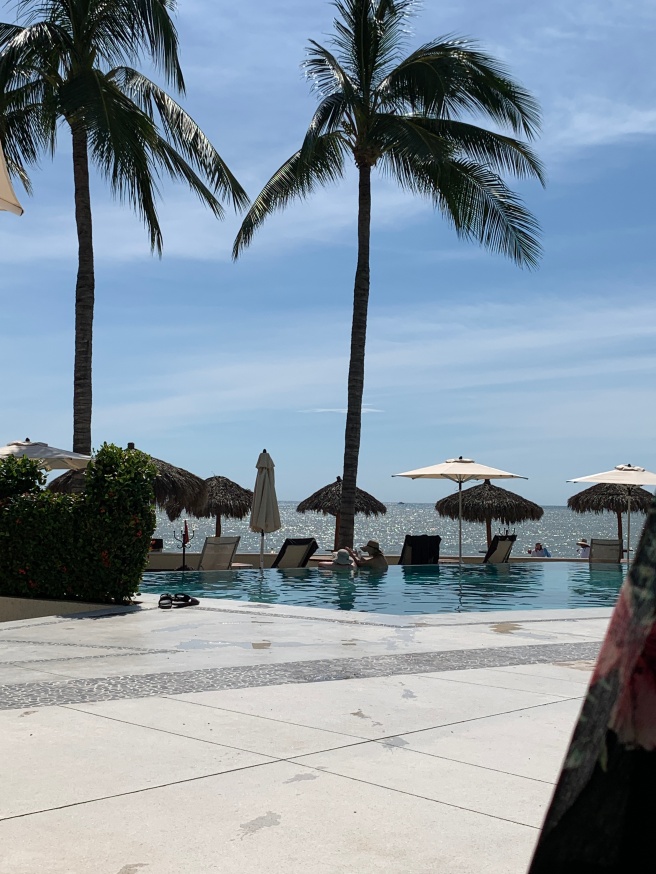 This is where we stayed 90% of the trip.

If you are already judging me, thinking that I am irresponsible or some other adjectives that I can’t think of right now, then you should probably stop reading these posts. There were some OMG moments on the trip,  things that are crazier (in retrospect) than being on an airplane. I won’t go into explicit details because 1. I don’t know the age of all the readers and 2. my parents read my blog.

The first couple of days that we were at the resort it was pretty much empty. We stayed in the pool, drinking, chatting and meeting new people. There were beach vendors down on the sand but they were very respectful and kept to themselves if you didn’t want to purchase anything. We did however almost die (sort of kidding) with our first dip in the ocean, apparently there was a red flag waving (cringe face) but that was news to us until later. The water was warm like a bath so we swam out. Long story short, the ocean was more aggressive than it lead on. I was able to get under the waves and get to shore but Shawna got caught in it and lost her brand new sunnies, that was the most devastating part. But she will claim to this day that mother nature was playing dirty. So we made our way back to the pool where we stayed all week; The red flag suddenly appeared out of nowhere and stayed put the entire week.

Doesn’t look so threatening does it?

Our room was your typical room but we had an amazing view. We were never in it aside from sleeping and showering. We fell asleep with the doors open but since their hours of operation have changed due to Covid, certain younger folks would take the party outside. The door then had to be closed to block out the sound of their drunk chatter and music. Yes, this trip made us realize that we are now “those” old people.

The Resort had two sides, adults only and family. All together there are about 7 restaurants but they rotated the nights that they were open. Two of those restaurants required fancy attire and since it was hot and very humid we decided early on that we would only dress up one night. Shorts and flips were where it was at. The first night we ate at the Japanese place on the family side of the resort. Food was fine, service was great, that was that.

Every night there was some sort of live entertainment in the lobby. The lobby or lobbies were all open air.

Day two we woke up, ordered breakfast and coffee and ate on our balcony. The only plans we had were to pool. Lay by the pool, play in the pool and drink in the pool. We ended up meeting a really nice couple from New Jersey and a couple from Idaho. We had a fun time visiting with them and decided to all have dinner together at the Seafood restaurant. Everything was going fine until the Idaho husband started getting flirtatious with me. {Let me mention that he was a police officer in Idaho who spent a lot of the afternoon talking about respect.} While we were sitting down after dinner he put his hand on my leg while asking “is this okay?”. “No, it’s not” I said and I moved away. Looking back, earlier in the day at the pool, his wife was making some adulterous comments which meant nothing to any of us at the time. Now we think it was all a plan in action to swing.  Different strokes for different folks, not our jam.  I also want to say that reading this you may think, so what if he put his hand on your leg, that’s not a big deal. But it is, it made me feel uncomfortable. Especially since we spent the day with each other as couples and had to listen about how A. he was a police officer and B. how he doesn’t deal with disrespectful people. He is the problem.

Moving on, we spent the rest of the evening with our new New Jersey friends listening to people butcher songs at Karaoke in the Lobby bar, and we could not wait for it to happen again later in the week.

Next up we test our luck in the jungle.