This recipe hails from Gourmet Magazine AKA Epicurious. Since our dinner theme was Oktoberfest and I am not a huge fan of German food, I decided to make something that sounded better than sausage and potatoes. I am pretty sure the German Chocolate cake isn’t really German, but hey… let’s just pretend. I mean, for christ’s sake, it’s called a German cake.

I decided to make this the day before our dinner, on the same day I was making homemade pizza dough AND pizzas. Let’s just say I bit off more than I could chew, well for a little bit anyway. Once I was under way and ready to pour the batter into the cake pans, I realized I didn’t have any parchment paper to lines the pans with. I considered hitting up my next door neighbors for some but then I thought to myself…’self, you have baked a many cakes without parchment paper, it will be FINE!” Not fine, not at all fine people. Each of the cakes stuck to the pans, ALL THREE CAKES WERE RUINED!  There was no way I was going to make them again so I tried to salvage the first cake, with tears in my eyes, I just made it worse. Shane came in to save the day and said it would be OK and he could get two of the cakes to work. So I continued with the rest of the recipe, which took hours. I read the recipe before I started but I didn’t really read it. Every step was time consuming.{being something needed to bake for a few hours or chill for a few hours}

Once every step was done and the cake was ready to assemble, Shane was able to salvage 2 of the cakes, the one I messed with was not going to be part of the cake [ all though we did enjoy  it that night] My three layer cake was now a 2 layer cake. Oh well. 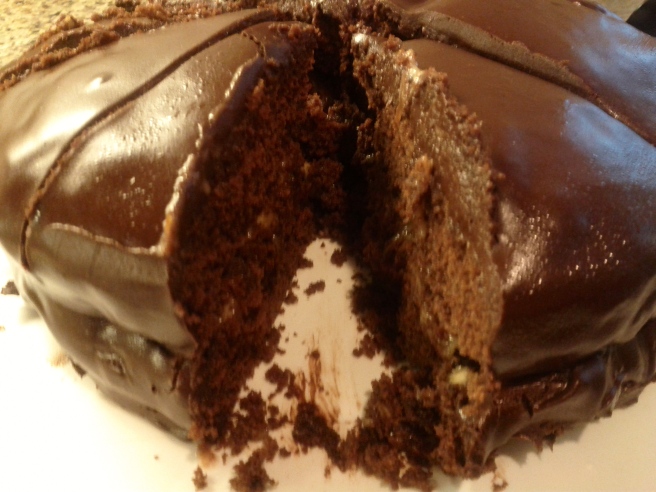 If you are more prepared than I was, this will be a pretty easy cake to make. Just make sure to have parchment paper! It was a really good cake, REALLY good!

Make cake layers:
Preheat oven to 350°F and oil cake pans. Line bottoms of pans with rounds of parchment or wax paper. Sift together sugar, flour, cocoa powder, baking powder, baking soda, and salt into a large bowl. Whisk together whole milk, butter, whole egg, yolk, vanilla, and almond extract in another large bowl until just combined. Beat egg mixture into flour mixture with an electric mixer on low speed, then beat on high speed 1 minute. Reduce speed to low and beat in water until just combined (batter will be thin). Divide batter among cake pans (about 1 1/2 cups per pan) and bake in upper and lower thirds of oven, switching position of pans and rotating them 180 degrees halfway through baking, until a tester comes out clean, 20 to 25 minutes total.

Cool layers in pans on racks 15 minutes. Run a thin knife around edges of pans and invert layers onto racks. Carefully remove parchment or wax paper and cool layers completely.

Spread coconut in a large shallow baking pan and pecans in another. Bake pecans in upper third of oven and coconut in lower third, stirring occasionally, until golden, 12 to 18 minutes. Remove pans from oven.

Pour condensed milk into a 9-inch deep-dish pie plate and cover tightly with foil. Bake milk in a water bath in middle of oven 45 minutes. Refill baking pan with water to reach halfway up pie plate and bake milk until thick and brown, about 45 minutes more. Remove pie plate from water bath.

Stir in coconut, pecans, and vanilla and keep warm, covered with foil.

Make glaze while milk is baking:
Melt butter in a 3-quart saucepan. Remove pan from heat and add chocolate and corn syrup, whisking until chocolate is melted. Transfer 1 cup glaze to a bowl, reserving remaining glaze at room temperature in pan. Chill glaze in bowl, stirring occasionally, until thickened and spreadable, about 1 hour.

Assemble cake:
Put 1 cake layer on a rack set over a baking pan (to catch excess glaze). Drop half of coconut filling by spoonfuls evenly over layer and gently spread with a wet spatula. Top with another cake layer and spread with remaining filling in same manner. Top with remaining cake layer and spread chilled glaze evenly over top and side of cake. Heat reserved glaze in pan over low heat, stirring, until glossy and pourable, about 1 minute. Pour glaze evenly over top of cake, making sure it coats sides. Shake rack gently to smooth glaze.

Chill cake until firm, about 1 hour. Transfer cake to a plate.