We’ve been home a week and I finally caught the cold! Of course it came on a Sunday, knowing I would be alone with the kids all week, well played cold. Kaili woke up with a slight cough and a runny nose so….

I wanted to catch you up in a Trolley incident we witnessed. Friday morning  we hopped on the trolley and headed to the convention center to see the car show. After a few hours of drooling over cars we most likely will never own we hopped over to Little Italy for lunch. After a decent meal at Davanti (Food is always good, service wasn’t the best.) we waited for the trolley to go back home. When it pulled up and the doors opened a woman hollered for us to get on another car, something about blood. We realized we didn’t process her request as we hopped in the next door down. Once on the train chaos ensued, there was shouting and as I looked down the aisle there were small pools of blood. A woman came walking our way holding her forearm, she was noticeably bleeding and went to push the button to open the doors but we were already moving. She just stood there holding her wound and everyone else just stood there minding there own business. This is the part I can’t wrap my head around, maybe it was shock or fear but I couldn’t believe it. I grabbed a diaper from my bag and told her to wrap it tight around her arm. Then I told the people comfortably sitting down with their heads in their iPhones to get up so she could sit down. I pushed the emergency button and the conductor informed me that authorities were waiting  in Old Town. Meanwhile Kaili was very concerned and wanted to have a front row seat, so Shane took over and I took Kaili to a further seat until we reached our stop.

This lady was bleeding and it was bad, like a slow pour onto the ground. Shane and I both would have done more had we had gloves, he did his best to keep her arm elevated without getting blood on him but she was fading fast. When we stopped the police came aboard and immediately arrested two people. We hollered for them to come get her, they weren’t in a terrible hurry and the ambulance wasn’t even there yet. They took her off and that was that in a nutshell. 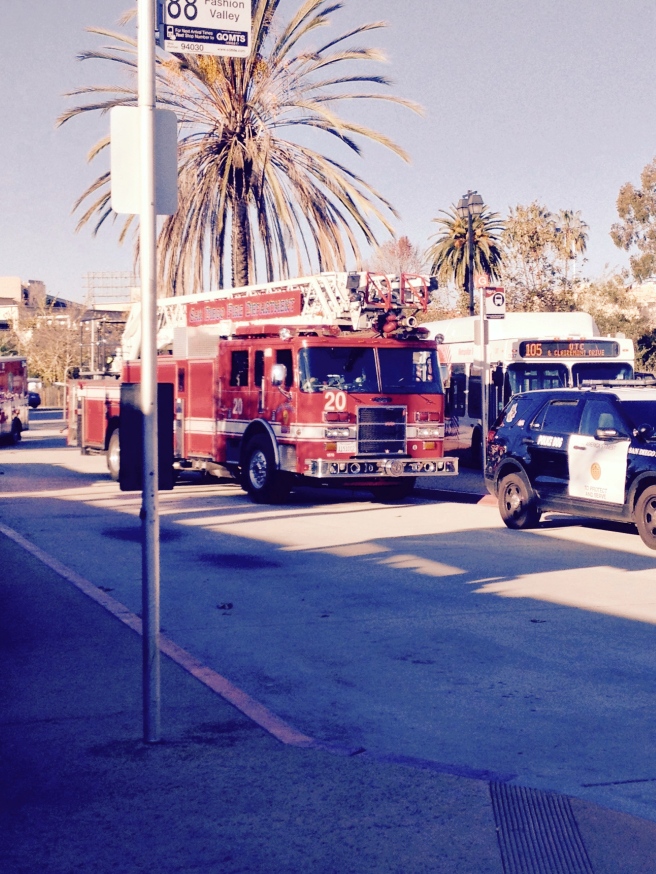 Once we were home we found out that the woman who was stabbed was apparently the aggressor and threw a punch at another older woman, whom in return stabbed her on the arm. It said she was at the hospital in critical condition.

Kaili had some questions that evening but I think we did a good job explaining and reassuring her, she hasn’t really brought it up since and no nightmares, which I was a tad worried about.

What I want to know is if you were a witness to that situation and a woman was bleeding really badly in front of you, would you help or mind your own business. What would you do? Primetime’s John Quiñones and I want to know.