It’s been 6 1/2 whole months since Miss Averi has come into the world. This is when time starts to speed up, at least that is when it happened with K. 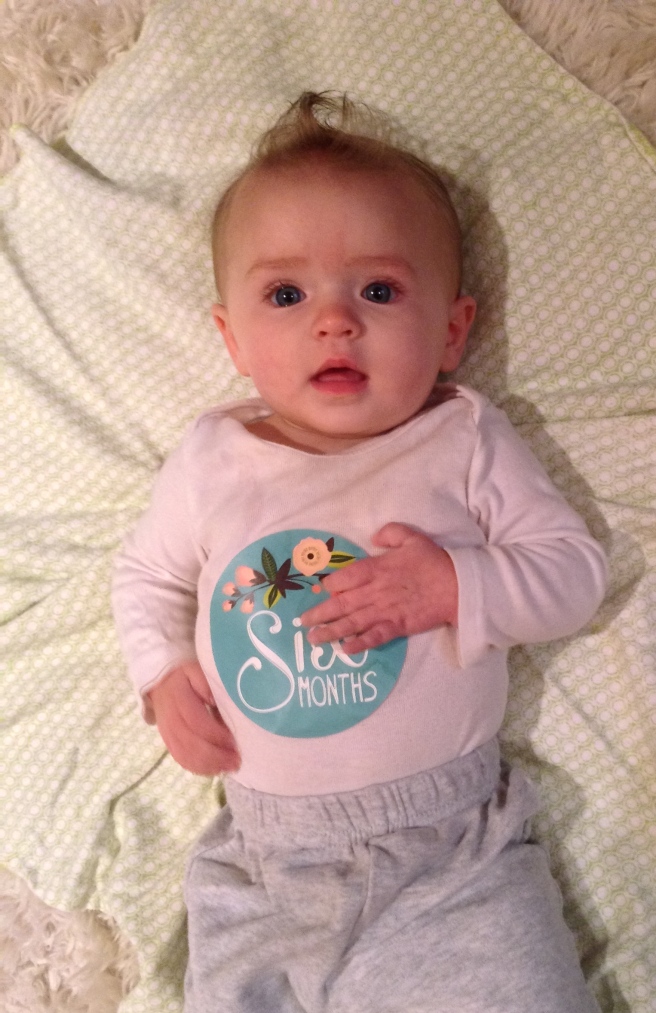 At 6 months Averi is is having a bit of sleep regression and I blame it on her last cold. She wakes up around 3 a.m and wants to eat, I have to wean her off of this…sigh. She takes 2 naps a day and  has her two bottom teeth. I don’t even know how much she eats a day but it’s a lot, the girl has an appetite. I started her on oatmeal and some pureed veggies but she’s not sold on them yet. For now it’s just for fun anyhow. I showed her a sippy cup the other day but I think that’s a ways in our future, girls gotta get a tad more motor control first.

She is super sweet natured and just a happy baby. The moms at Kaili’s gymnastics are always commenting how they can’t believe Averi will just chill in her carseat the entire time, I guess we one of the lucky ones because she is just fine in her carseat and stroller.

She is becoming a little football fan. If that sport is on the television she watches. She will even arch her neck to get a better look, it’s funny and a little scary at the same time. I put her on our bed to put clothes away and turned the TV to the NFL network, that gave me almost 1/2 hour.

She is the noisiest baby. She gabs, yells, growls and laughs, all.the.time. I’m pretty sure Kaili didn’t make any noise until 6 months. It’s cute and annoying, the screeching is ear piercing.

We had our first bout of constipation and I will associate that to the squash she was eating. She was getting uncomfortable so I picked up some prune juice. 4 oz and a day later the problem was, lets say unplugged and we have been good since.

She is on the low end of the spectrum in weight at 14 lbs and at the higher end for height. I look forward to watching her change each month, she’s just the cutest. Happy 6 months Monkey butt.